In this lesson we will learn how to create and name the first chord of the C major Scale: CMaj7

Hello everyone and welcome to the free jazz harmony lesson, here you will learn everything you need to know to understand a chord progression like the common II V I and other very useful stuff that you will meet all the time in general jazz or in gypsy jazz.. We’ll focus in understanding the context of a chord and what is possible to do on it… Of course everything is possible in improvisation and with the right intention, chromatism or idea everything can work, but in order to do what you want, you have to know and learn stuff to use, and there is some generalities and rules that can be made and that will help beginners to start their journey in jazz and gypsy jazz… 🙂 So let’s get started !

First we have to understand what is and how are created chords.

A chord is at least 3 different notes played together, in pop or folk we usually use simple 3 notes, fondamental, third and fifth: think well balanced tone, simple colors… In jazz we’ll add a 4th note to the first 3, it will add specific character, more color to the sound, for instance it will modify a stable chord to open it with more subtility or il will create tension on a basic chord…

So to understand how we build basic chords let’s look at the notes on a piano keyboard and at the basic scale created by the white note, C major, it has 7 notes:

The interval between notes are important, the white keys of the piano makes the major scale, each note is a degree from the first one and the number is written in roman letters..  the steps from the first one is important and will define the nature of the chord and it’s name… Note also that this basic scale is also called “Ionian mode”

To create a basic chord we choose a first note that we will call the root. and we will add consecutive third, so its third and its fifth: Let’s say we start with the root “C”, then we jump the next note (the D ) to take the third, so “E”, then again we’ll jump (the F) and take the one after, the fifth “G”. In jazz we usually have 4 notes, so we continue, we jump the note A and take the seven: “B”. So here is the result:

Now we have to know his exact name, we will look at the gap between the first note and the others: depending on the gap there is some convention you have to learn to tell the correct name:

We have to know that there is two kind of third : if the note is 2 steps from the root it’s called major third, If the note is 1 step 1/2 from the root it’s called minor third. The third is very important for a chord or a scale, it will gives it his nature… It’s common to say that major third gives a happy/joy mood to a sclae or mode, and a minor third is more sad, or nostalgic…

Between our root “C” and “E” we have 2 steps, it’s called a major third. This gives the name Major to the chord, note that we don’t have to write it, “C” means implicitly that it is Major, but if it would have been Minor we have to write it: “Cmin” or “C-“ this is just an usual convention so we have to know it.

Between C and G we have 3 and half step, so it’s a normal fifth. This is the most common chord with 3 notes, it’s called C major, and we can write it just “C”, let’s see the jazz chord with 4 notes.

Between the C and the B it’s 5 and 1/2 steps and it’s called a Major 7, and at the inverse of the third when the 7 is major we have to mention it, if the 7 is at 4it’s minor (we say ‘dominant’ chord) we just put 7 without mentioning it

So we have now our I degree chord corresponding to the scale of C Major, and it’s name with 4 notes: the C Major 7  or CM7 ! 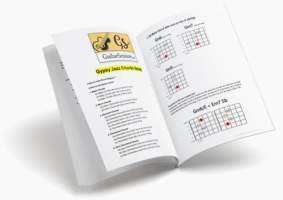 Subscribe to get gypsy jazz free lessons and more

This website uses cookies to improve your experience while you navigate through the website. Out of these cookies, the cookies that are categorized as necessary are stored on your browser as they are essential for the working of basic functionalities of the website. We also use third-party cookies that help us analyze and understand how you use this website. These cookies will be stored in your browser only with your consent. You also have the option to opt-out of these cookies. But opting out of some of these cookies may have an effect on your browsing experience.
Necessary Always Enabled
Necessary cookies are absolutely essential for the website to function properly. This category only includes cookies that ensures basic functionalities and security features of the website. These cookies do not store any personal information.
Non-necessary
Any cookies that may not be particularly necessary for the website to function and is used specifically to collect user personal data via analytics, ads, other embedded contents are termed as non-necessary cookies. It is mandatory to procure user consent prior to running these cookies on your website.
SAVE & ACCEPT