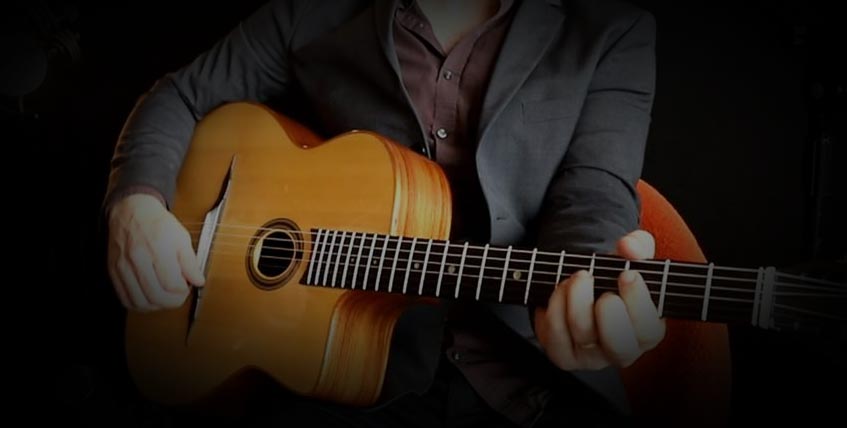 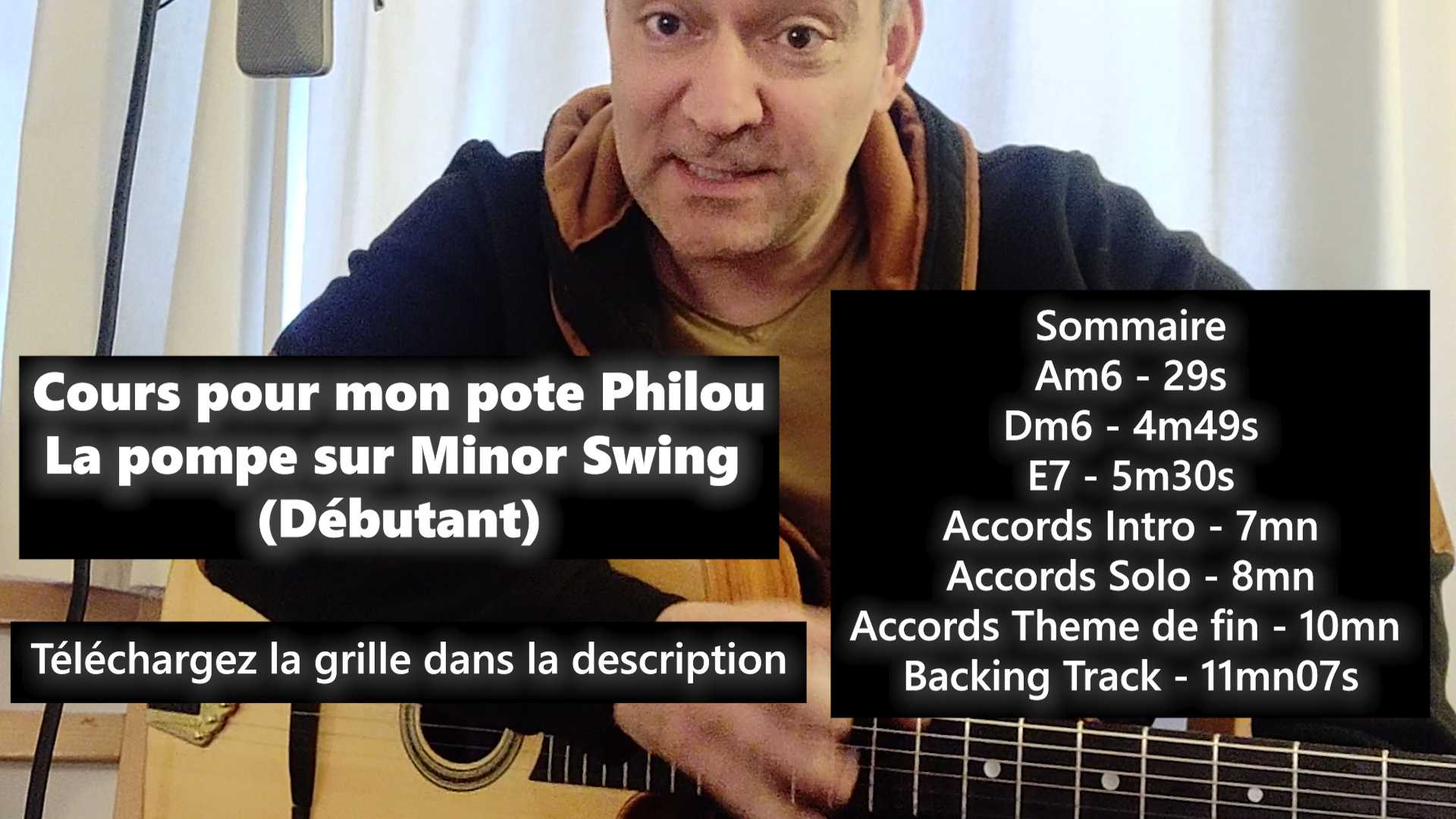 [Music] well it's morning i'm not very awake but that's okay Hello Phil so here's a little video for you as you asked me to learn the gypsy guitar we will start right away with the most played song in style which is not very complicated we can play it with three chord positions or even two positions it's of course Minor Swing ! we're gonna start by learning the accompaniment: we will see the chords. The first chord is a minor 6 you surely know the minor one the position in bar but we do not do bar chords in gypsy jazz you go kill your hands if you do bars and the pump is quite demanding you have your fingers constantly raised and you can you have tendonitis finally let's say it's much easier by making another position, okay so Am6 we will play it like that [Music] so here is the diagram that appears here so that gives you the middle finger 5th frets on on the E string then for the A Strings we mute it with the fat of the finger you see, we don't care about this one. Then the index on the 4th fret D strings and the other two fingers one the 5th fret on the following strings the treble E string we also mute it. and it gives us this very nice chord now for the rhythm actually the gypsy rhythm guitar going somehow replace the drums so you have to have a little effect poum chak poum chak poum chak and accentuate a little bit the chak, do it a little bit stronger so let's do it. 1,2,3,4, etc. then if you look closely I actually raise their fingers every time every time 1 2 3 4... you see ? so to start it's good to do it really straight we will count the 4 beats and 1 2 3 4
once you know how to do it, with the right position and being fairly dry lifting your fingers every time then there is a small effect which gives swing, with my right hand I touch a little bit the strings going up a small comma I touch the strings going up
You see? there is lots of ways to do 'La Pompe", I do it like this I find that it adds swing .... then there is lots of ways to do 'La Pompe" some who will attack harder there are some which are going to be very thin you're not even going to hear the harmony on the 2 and the 4 time see like that one two three four
it's really percussion you really replace the hi hat of drums. So this is the first chord [Music] you have to practice doing this well feel the 4 time... don't say it's tiring ! you work you do it for hours ! one two three four... all the difficulty is to raise the fingers each time Put the thumb behind here to have strength, to make it sound right. You don't do it like that. It has to be dry and short. So often this what's going on is that we're playing with the slice of the pick to avoid to pull the strings too hard but you see on the side you turn a little bit the pick and it gives you a sound softer
You see ? so the first chord it's ok, the rhythm it's ok well you count to 4 it's not complicated second chord we're gonna do the same thing but at the 10th fret it corresponds to Dmin6 when I say 10th box is the bass since the index and on the 9th box therefore puts the middle finger on the nine fret. Dmin6 very simple, no difficulties just need get used to raise the fingers to make it short and to give that dry side and make it swing with the right hand

so you have to control well how do you put your fingers and when did you raise them. ok, super simple second chord... then third chord E7 we will take a classic chord we will not complicate things so E7 [Music] on the other hand the first string the bass E so we're not going to play it, we mute it, you can play it but for the moment we will try to control what we do, and we mute it. with the thumb here you see I put my hand like that so it will not ring and also the high E we mute it too.
and that's three pretty chords, basic. A minor 6 Dmin6 E7 And Am6. now let's see the order in which we play the chords and the song structure let's go [Music]
so Minor Swing is divided in three parts it's not complicated there is the intro, the solos and the final theme it looks a little bit the same but it's not let's go so the intro the intro it's the part that makes that
ok ? very simple ! and what interests us today these are the chords so the Amin6, Dmin6, one measure of each

so we're gonna do it again, we do that twice what I just did... super simple... so the intro, 1,2,3,4 !
now we will go on the part of the chorus Chords are displayed now up here then I made a version simplified to make it super simple for you my Philou 🙂 Am Dm E7 Am 2 bars each and then it changes Dmin, Amin, E7 ... Am, E7 it's simple you have to respect the order of chords and it should be fine let's go together 1 2 3 4
It starts again from the beginning
We did it ! super simple you see it's not complicated you just have to respect the thing and practice changing chords correctly in the tempo I don't know put a backing track what you want but work correctly to play in tempo and with right chord change this is the chorus part and the last part the theme it's simple this is just the first part of the chorus so Amin D minor, e7 and a doubelbass break on the Aminor and it repeats so let's see the final theme 1 2 3 4...
[Music]
so here it is Philou ! you see it's really not that complicated with just two positions you can do the song we will be able to play it together if you work enough... so here we go to finish the full piece we're going to do too the Intro, 2 chorus and the ending theme it's Play Along that I made for my guitarsession.net site, I'll put you the link in the description there are 10 minutes of backing tracks if you want practiceand that's it ! work like crazy and the next time we meet we will play it together !
So to start you work like crazy that, you know it by heart see you soon ! ciao
SEE ALLAdd a note

Subscribe to get gypsy jazz free lessons and more

This website uses cookies to improve your experience while you navigate through the website. Out of these cookies, the cookies that are categorized as necessary are stored on your browser as they are essential for the working of basic functionalities of the website. We also use third-party cookies that help us analyze and understand how you use this website. These cookies will be stored in your browser only with your consent. You also have the option to opt-out of these cookies. But opting out of some of these cookies may have an effect on your browsing experience.
Necessary Always Enabled
Necessary cookies are absolutely essential for the website to function properly. This category only includes cookies that ensures basic functionalities and security features of the website. These cookies do not store any personal information.
Non-necessary
Any cookies that may not be particularly necessary for the website to function and is used specifically to collect user personal data via analytics, ads, other embedded contents are termed as non-necessary cookies. It is mandatory to procure user consent prior to running these cookies on your website.
SAVE & ACCEPT